Coco Robicheaux played many gigs at The Parrot in the mid-eighties and as a matter of fact was the closest thing to a house band the Parrot ever had, playing three or four nights a week with Chris, a keyboardist he had brought with him from New Orleans, and whatever local musician cared to sit in. Without realizing it at the time, patrons were being treated nightly to some of the finest music New Orleans had to offer.
A friend of Parrot bartender Mike Fisher, who arranged his Parrot gigs, Coco moved here with his wife, who was also psychically gifted.

I recall the house they rented on Seminary Street had been the scene of a particularly grisly murder months earlier. When they stepped in there for the first time they were overwhelmed by the vibe and could not stay until she had purged the entire house with charms and herbs she had sent to her from new Orleans.
He was a sweet and gentle man and will be missed. 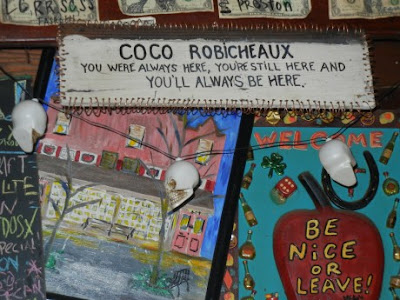 Hoodoo bluesman Coco Robicheaux collapsed on Friday, Nov. 25 at the Apple Barrel on Frenchmen Street and was taken away by ambulance. He was pronounced dead after arriving at Tulane Medical Center. He was 64.

Known for an especially gravelly voice, a swamp-blues guitar style and a fascination with subjects of a spiritual and/or mystical nature, Mr. Robicheaux lived an especially colorful life, even by the standards of a New Orleans musician.

He released several albums over the past two decades. He was a mainstay of the Frenchmen Street entertainment district, a familiar figure both on- and off-stage, even as he also performed around the globe. He was a regular on the schedules of the New Orleans Jazz and Heritage Festival

Coco walked a strange path, drawn into a world where his Indian heritage blended with his Cajun-rooted joie de vivre, into the syncretic religion of New Orleans, a blend of Spiritualist church and after midnight barroom, a spirit candle and a bottle of whiskey. A natural man, walking with the spirit. “I am a pilgrim” he sang to close his last album over a joyous banjo. “I’ve got a home in that yonder city…it is not been made by hand. I got a mother, a sister and a brother, who are gone to that sweet home. And I am determined to go and see them…over on that distant shore….cause I am a pilgrim, and a stranger, traveling through this wearisome land.

New Orleans musical and spiritual icon Coco Robicheaux is walking with the ancestors. One candle goes out and a thousand new are lighted in mourning and memory. Go with sage and sweet grass, go with a song and a bottle, go with a guitar in hand and bring New Orleans to the spirit land.

“I had to use my voice and hands/To make the music of the spirit land.”
– Coco Robicheaux

When news of the death of local blues and spiritual icon Coco Robicheaux went viral on the Internet Nov. 25, some said his last words were, “I’m home.” Bartender Sara Shaw at the Apple Barrel bar on Frenchmen Street, who attended to him in his last moments, as well as the patrons seated next to him when he collapsed, remember them as “The next round is on me.”

A photograph of Robicheaux on one wall bears a Hitler mustache added by Robicheaux himself. “He asked for a pen … and said someone was going to do it, so it might as well be him,” Furlong says. A set of caricatures that lines the stairs going up to Adolfo’s restaurant above the bar includes one of Robicheaux.

Robicheaux had just returned from a week-long Thanksgiving visit with his daughter and granddaughter in Atlanta when he walked into the Apple Barrel Friday night. “He adored that child,” Montoya said. “He tried to quit smoking cigars once after she started imitating him with a stick.” Robicheaux sat down next to regular patrons Leigh and Jim Crawford, who confirmed the “next round” last words. He greeted Leigh and bartender Sara Shaw with a friendly kiss.

Shaw said she turned around to mix Robicheaux’s usual drink — Sauza Reposado tequila, shaken over ice — and when she turned back around, she saw Robicheaux slumped over the bar before he fell to the barroom floor.

“We were the last women Coco kissed,” Crawford and Shaw say.

Two second lines are scheduled to honor Coco Robicheaux. The first takes place Saturday, Dec. 3 starting with a memorial service at Marie’s Bar on Burgundy Street, proceeding to the Apple Barrel. A second on Dec. 12 will start on Frenchmen Street at 3:30 pm, and proceed to the House of Blues, where many of Robicheaux’s past musical collaborators will perform a tribute concert at 6 p.m.

Curtis John Arceneaux (October 25, 1947 – November 25, 2011)[1] better known by the name Coco Robicheaux, was an American blues musician and artist, from Ascension Parish, Louisiana, United States.
He was born in Merced, California.[1] Arceneaux took his stage name from a Louisiana legend, in which a naughty child called Coco Robicheaux, is abducted by a werewolf (Loup Garou or Rougarou). Also, the name ‘Coco Robicheaux’ is repeated in the song “I Walk on Guilded Splinters” from Dr. John the Night Tripper’s 1968 album, Gris-Gris.[2]
Robicheaux appeared in the episode “Hotshots”, of the USA Network series Big Easy, playing a New Orleans musician named “Coco”, who had sold his soul to the devil. Two of Robicheaux’s songs were also featured in the episode, “Broken String” and “Spiritland”. Coco Robicheaux appeared as himself in the second episode of HBO’s Treme, first broadcast in the US on April 18, 2010.
Coco Robicheaux died in November 2011 in New Orleans, Louisiana, at the age of 64.[1]