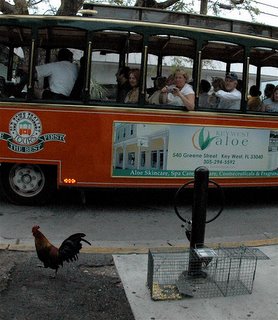 This whole chicken thing has got a few new wrinkles in it. Namely, due to the glut of rogue birds at the Chicken Store they will no longer accept any of our collars. And as added insurance to their new quota system, they kept our trap that we had rented from them.
Moreover, the trap positioned outside the bar, baited with freshly popped popcorn, has inspired trolley-loads of gawkers looking for A Real Key West Photo op, not unlike those on photo safari being trucked out to some Serenghetti watering hole for a glimpse of wild beasts in their natural setting. So the sidewalk outside our front door is in danger of becoming some sort of bizarre poultry-oriented Lion Country Safari with all the gawkers perched safely inside their orange trollies.
In a nutshell, is it really worth having a truckload of shutterbugs disturbing the Wa of those inside the bar just to rid ourselves of the occasional nuisance hen or rooster.
I dont know, probably not.
For now there’s kind of an uneasy armistice on the corner.
But just in case any chickens check the blog: the popcorn machine is still a non-negotiable demand and remains off limits and we bought our own trap.