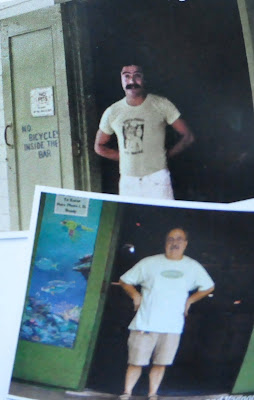 To quote poet Paul Violi, “Veni, Vidi, Velcro”, “I came. I saw, I stuck around”
We all know there been a lot of talk for the last few months about what’s going on at The Parrot. I joked that one afternoon in Publix, cornered by inquiring minds, I felt like I was giving a press conference in the produce aisle.
“you, in the back, with the canteloupe, you had your hand up?”

And now the question I get in the produce aisle is: how do I feel about what’s happened, and what’s gonna change.

I’d like to take a minute, now that the dust has settled, to share my feelings.
The answer is simple. I’m thrilled and feel he’s a natural for the Parrot. 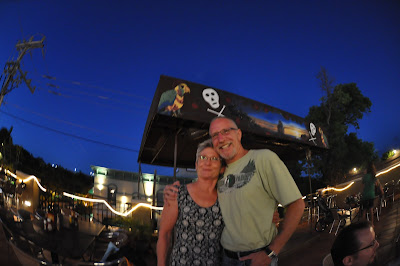 Linda and Pat, like the awning behind them,The Parrot and The Pirate
Linda Bean knew it, I knew it and probably most importantly, Jim Bean knew it too.
Bean buttonholed Pat on the corner early one morning several years back and walked him through the property, ostensibly to show him the new band house. But Bean knew it then. Pat was the guy.
And what makes it so is that he shares our core values about what makes the Parrot the Parrot. 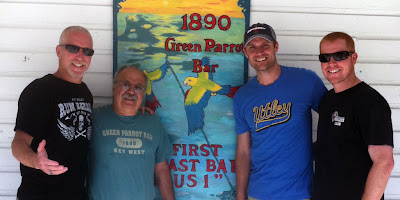 Pat and I, son-in law Jeff Sorg and son Michael Croce
And much more importantly than sharing the values of just myself and the Beans, Here’s what I see: Pat shares the core values with all the people that really make The Parrot what it is, the real keepers-of-the-flame, the customers,
He sees the value of the place by seeing what it is that others value in it, seeing it through the eyes of those others who cherish it. That’s what I see continuing in this new partnership.
What remains on people’s minds is still, what’s gonna change?
And I see the answer to that, ultimately, in the question itself, and moreover, the fervor with which it is asked.
That passion and zeal underlines what we all already know, the need to preserve the uniqueness of what has been created here: the vibe, the great music, a place to be yourself, to share a beverage or a thought, or be by yourself, a place to nail that feeling that anything is possible, it’s been so many things to so many people for so many years, that I’m certain it will, like The Dude, abide.
The fact that customers are so vocal with the fate of this little corner saloon speaks volumes, you hear it in the bar, on the street, in the citizens voice, the customers’ concern for this sense of shared stewardship is remarkable.
And what has been created here, has not, has never been, created by design, but more by accretion.
In an essay contained in “A Hut of One’s Own” by Ann Kline and titled “What Architecture Isn’t” it is said how the accumulation of years of inattention can make a place seem under-designed and unremarkable, that we’ve seen seen places like them before and assume, falsely, that we will see them again, anytime.
They seem to have generated themselves and everyone takes them for granted.
We often say of these underdesigned places that they possess authenticity, What we need to remember here is that authentic places had little overt style in the first place, what appeals in authenticity is designer neglect and when places like The Parrot do survive they become meccas for those people who tire of the designers tease. This then allows people to tell their stories undistracted.
“a place to allow people to tell their story undistracted”… I believe that could be our mission statement. 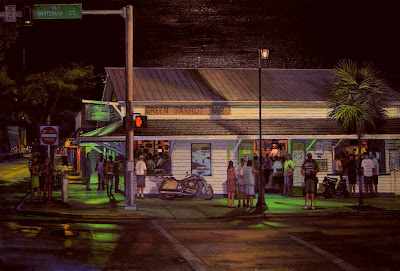