The Captain Outrageous website contains a page containing a the Captain Outrageous Photo Album with dozens of 70’s and 80’s photos of Key Westers mostly taken in or around Norman’s White Street burger joint, “The Last Straw” pictured below. The eatery was located next to Page’s Paints, where Mo’s restarant operates today. 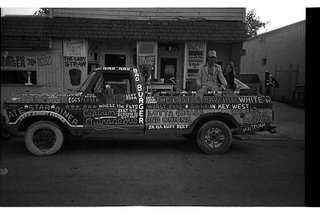 Below is a detail from Captain Outrageous’ truck that typifies both the style of Norman’s car art and his offbeat sense of humor.

These next three pictures jumped immediatly out a me since all three were regular Parrot customers and good friends. All are sadly now gone, and I say this with utmost respect, all three would not be out of place in some rogue’s gallery from another century. 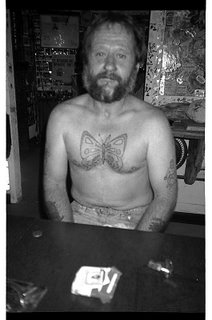 First is Butterfly George, above, his bare-chested portrait providing ample explanation for his nickname. George was a former prize fighter from Rhode Island and a scrapper. Like the tattoo of the baby on his left arm sporting oversized boxing gloves, what Little George lacked in size he made up for with heart, speed and guile. Possessing such qualifications, he was often sought out as a sort of escort to those people who felt the need for such services, for whatever reason.
He was also an immensely steadfast and loyal friend. To borrow a phrase used to eulagize another “Little George”: “If you went in the alley with George, you came out of the alley with George”

Next is Bink. A former Green Parrot bartender, soft-spoken and sentimental, but arguably short-tempered with a penchant for marathon bare-footed bar-hopping. This said, he was good people. 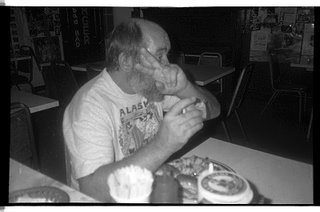 Last is Flat Top Pete, pictured below. Larger than life. Pete fairly defies description. If asked, he would reply that he was a mason by trade but if you looked in the trunk of his car you would be hard pressed to find a trowel or a level, Coming and going for months at a time, his stories, delivered dead-pan with convincing sincerety, could have dropped straight from an Elmore Leonard novel, The truth is, the last time I saw Flat Top Pete and Butterfly George they were together at the bar, by Pete’s own admission sharing a beer. Pete was seated on a barstool, while George’s earthly remains, sealed innocently in a what appeared to be a gallon zip lock baggie, sat on the bar in front of him, and yes, they were in fact sharing a beer while George awaited transport to a hilltop plot in New England Pete had set aside for him. 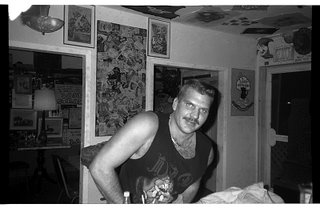