From The Brown Derby and Conchology to The Gobi Desert and archeology with this story of one man’s well-hidden stash. 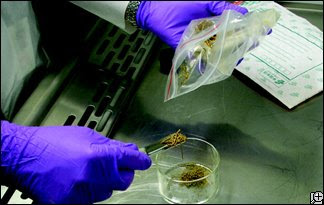 Seen here is a 2700-year-old stash of marijuana, found in a Gobi Desert grave near Turpan, China. Ethan Russo, a visiting professor at the Chinese Acadmy of Scineces, and his colleagues report the discovery in the current issue of the Journal of Experimental Botany (abstract). From Discovery News:
The size of seeds mixed in with the leaves, along with their color and other characteristics, indicate the marijuana came from a cultivated strain. Before the burial, someone had carefully picked out all of the male plant parts, which are less psychoactive, so Russo and his team believe there is little doubt as to why the cannabis was grown.

What is in question, however, is how the marijuana was administered, since no pipes or other objects associated with smoking were found in the grave.

“Perhaps it was ingested orally,” Russo said. “It might also have been fumigated, as the Scythian tribes to the north did subsequently.”
A link to the full story from Discovery is here.
or an ABC News link here.