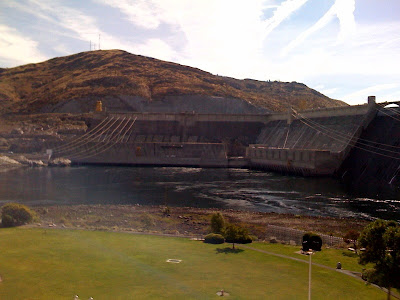 When we last we visited our wandering hero he was fixing Mitzi’s fence in South Dakota.
Since then he’s moved on to Montana to redezvous with our pal Rudy Prazen at Dink Bruce’s house in The Big Sky State. Rudy is also touring the states on his hog and after visiting with Dink plans to turn right and head up to Lake Louise in the scenic Canadian Rockies.
With repairs on Dink’s house completed, Buco has now moved on.
Just minutes ago we received this photo in our inbox taken at The Grand Coulee Dam on the Columbia River in Washington state.The largest concrete structure in the United States, I sure as hell hope it doesn’t need any fixin’ because regardless of what kind of tools Buco has in his saddlebags but he’ll sure give it a try.