High-Octane Barn Burners Chicken Brown Cow bring their Old Timey Music to The green Parrot on Wednesday, May 18th with shows at 5:30 and 10:00 P.M. 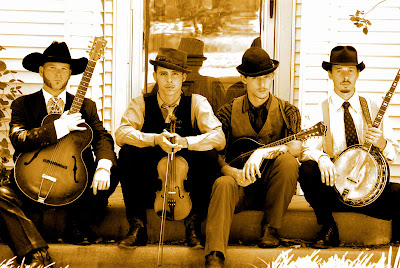 Charlie Hatcher is also an original member playing Bass and Singing. Charlie is currently not touring with the band and is the proud Father of he and his Wife’s baby Girl; Ruby. Congrats Charlie –

BrownChicken BrownCow StringBand began performing in the Spring of 2008 in West Virginia. BrownChicken gelled as a group fast, effortlessly. During late evening jams at various back porches and campfires the band was born. The boys spent a lot of time together, really listening to each other, the results of which quickly began to show up in the music. In the Fall of 2008 BrownChicken BrownCow StringBand moved to Maui, Hawaii and released our first album: “Fruit Goggles”. When they first arrived in Maui they began performing on the streets of Paia meeting folks and exploring.

While touring Maui the band wrote their second album: “Gallop on You”. This album includes some of the first tour’s favorite works: Gypsy Jig, Bees Making Honey, Put you in the Ground, and many more. Since then BrownChicken has toured the United States coast to coast non-stop. The Band turned two years old this past August 2010 and released their third Album : “…It’s a Deep Sbject” in West Virginia on July 2, 2010 at the Wild Bean in Lewisburg. BrownChicken BrownCow StringBand makes it back to their home state of West Virginia once a year to visit and perform. Look for them their in August 2011.