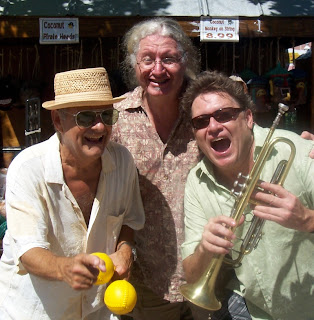 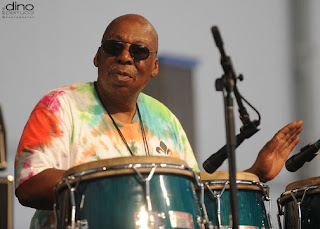 Born and raised in the historic Treme neighborhood of  New Orleans,  “Uganda” Roberts was introduced to New Orleans pianist Henry Roland Byrd, better known to the public as Professor Longhair at the 2nd annual New Orleans Jazz and Heritage Festival in 1972 and Roberts would go on to tour and record with Professor Longhair for eight years, until Professor Longhair’s death in 1980.
Roberts is featured on Professor Longhair’s Rock N Roll Gumbo (1977), as well as Fess’ last studio album ever recorded, Crawfish Fiesta (1980). The London Concert (recorded 1978, released 1994) is a duo performance by Professor Longhair and Roberts.
After becoming an in-demand conga/percussion player in New Orleans, Roberts established a relationship with fellow Treme resident and neighbor, record producer Allen Toussaint,  leading to Roberts becoming a house percussionist in Toussaint’s Sea Saint Studios, playing on recordings such as The Meter’s Afrika and Hey Pocky Way, as well as Toussaint’s classic 1972 recording,  Life, Love, and Faith.

Roberts toured with Willie Tee and the Wild Magnolias off and on from 1980 until 1986, when he took a hiatus from the music industry, occasionally coming out of his semi-retirement to tour and record – such as on Dr. John’s  albums Goin’ Back to new Orleans (1992) and Dis, Dat, or D’udda (2004).

Uganda Roberts has recorded commercially with Irma Thomas and John Mooney and has performed as himself on the television series Treme.
The Green Parrot Bar is your Southernmost Center for Culture of all kinds on the corner of Southard and Whitehead Streets.
For additional information call The Green Parrot at 294-6133