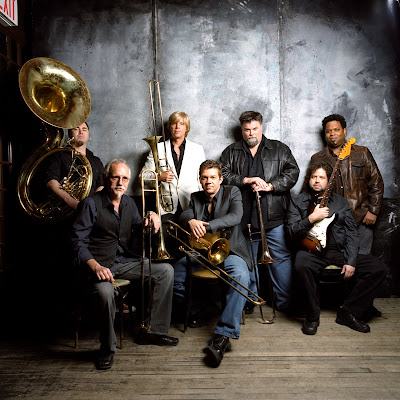 Bonerama at Green Parrot
“The Ultimate in Brass Balls”

With the sheer force of five trombones playing simultaneously as their calling card, Bonerama, brings their thunderous funk attack to the Parrot stage for two nights of pure horn muscle on Sunday and Monday, August 5th and 6th, beginning at 10 o’clock.

When Bonerama struts onstage with its four-trombone frontline, you can guess it’s not quite like any rock ‘n’ roll band you’ve seen. When they tear into some vintage New Orleans funk, there’s no questioning from which city these guys hail. And when those ‘bones start ripping into Hendrix and Led Zeppelin licks, all stylistic bets are off.

Even in a city that doesn’t play by the rules, New Orleans’ Bonerama is something different. They’re not a traditional brass band, but they’ve got brass to spare—even with no trumpets or saxes in sight. Bonerama features a dizzying display of trombone talent; four trombones, to be exact. Band leaders Mark Mullins and Craig Klein (of Harry Connick’s band) shelf any jazz subtlety for Bonerama, opting instead for heavy funk, rock ‘n’ roll, and pure horn muscle. Mullins and Klein are joined by fellow boners Steve Suter and Rick Trolsen, imaginative and dynamic sousaphone player Matt Perrine and edgy experimental guitarist Bert Cotton. The band also features a rotating cast of New Orleans’ finest drummers, including Russell Batiste, Stanton Moore, Eric Bolivar, and Terence Higgins.

Since live performance is what Bonerama is all about, it’s no coincidence that their third album, Bringing It Home, is also their third consecutive live disc. It also testifies to the amount of tightening-up the band’s done in recent years. Joining another stack of Bonerama originals are covers ranging from the Meters and George Porter Jr. to the Beatles (two from the White Album, no less) to Thelonious Monk. And when they take on Led Zeppelin’s “The Ocean” – with trombones doing the familiar backing vocals along with the big guitar riff – you can practically hear the audience’s jaws dropping.

The New Orleans-based trombone blitzkrieg was formed when Mark Mullins and Craig Klein found themselves with some rare time off from their steady gigs with Harry Connick Jrs big band. A funk band featuring five trombone players had never been done, even in the “anything goes” environs of New Orleans. Isn’t one trombone loud enough? Mullins and Klein didn’t think so. Despite their fine abilities in jazz, Bonerama was to worship on the two-headed altar of Jimi Hendrix and The Meters and subtlety was not the foundation upon which Bonerama was to be built. Rock and Roll formed their mission statement, along with the second line funk of their New Orleans roots.
Gathering up a dizzying display of trombone talent, Mullins and Klein quickly brought fellow honking peers Steve Suter and and Rick Trolsen into the fold. Augmenting their horn attack came the imaginative and dynamic sousaphone player Matt Perrine, the edgy experimental guitar of Bert Cotton, and the entrenched rhythmic pocket of drummer Chad Gilmore.
As their sound evolved, it became apparent that their sound was one that defied typical labels. A thunderous funk attack might suddenly turn into an acid rock maeltdown. Their unpredictability was infectious.
After well-received local gigs, a noticeable buzz began to form around the bone-happy upstarts but it has been the New Orleans Jazz and Heritage Festival performances that has truly launched the band, even garnering the attention of Rolling Stone editor David Fricke. Fricke, possibly the most influential rock critic in the country lauded the band’s powerful musical presence calling them “the ultimate in brass balls…five trombones blowing power chords and punchy riffs like true air guitars.”
Don’t miss this chance to see one of the hottest, most creative bands in New Orleans at their only Key West appearance at your favorite Key West music venue, The Green Parrot Bar.
The Green Parrot Bar is your Southernmost Center for NOLA Culture at the corner of Whitehead and Southard Streets. For additional information call The Green Parrot at 294-6133