I’m posting this obituary as it appears in today’s New York Times because of its’ connection to last week’s entertainment at The Green Parrot, namely The Bluerunners.
The Bluerunners are from Lafayette, Louisianna.
Lafayette is to zydeco what Clarksdale is to delta blues. I’d guess that this gentleman influenced these boys in more ways than one. 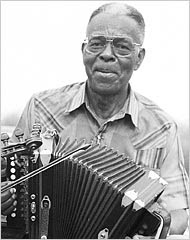 Alphonse Ardoin, a Louisiana Creole accordionist and singer nicknamed Bois Sec whose music stalwartly sustained South Louisiana tradition, died Wednesday of natural causes in Eunice, La., where he had been living in a nursing home, said his son Morris. He was 91 years old.

For five decades, Alphonse Ardoin worked regularly with the fiddler Canray Fontenot, trading quick-fingered passages on some of the oldest known Creole tunes and infusing Cajun waltzes with the blues. English speakers sometimes called the style “la la music,” but it was known by its players simply as “la musique Creole.”

Eventually, the Creole waltzes and two-steps would be punched up, plugged in and fused with rhythm and blues, creating the zydeco music that still fills South Louisiana dance halls. In 1986, Mr. Ardoin and Mr. Fontenot (who died in 1995) both received from the National Endowment for the Arts the National Heritage Fellowship, the highest American award for traditional arts.

Alphonse Ardoin was born in 1915 in rural Duralde, La., the son of sharecroppers, and he worked on farms all his life. As a child, he was nicknamed Bois Sec (“dry wood”), because he had a reputation for being the first in the cotton fields to seek shelter during Louisiana’s sudden downpours.

Mr. Ardoin took up the button accordion, an instrument that had a family tradition. His cousin Amédé Ardoin made pioneering recordings of French Creole music with the fiddler Dennis McGee. Alphonse Ardoin took up the accordion and learned his cousin’s style, in part by playing triangle in Amédé’s band. According to Michael Tisserand’s book “The Kingdom of Zydeco,” Alphonse told his cousin, “It won’t be long until I catch up with you.”

But music remained a sideline until the 1940s, when he started working regularly with Mr. Fontenot. As the Duralde Ramblers, they played at dances and parties and on a live radio show broadcast from Eunice. Their reputation spread so widely that they were booked at the 1966 Newport Folk Festival. On the way back south from the festival, they stopped in Virginia and recorded their first album, “Les Blues du Bayou,” which was later reissued by Arhoolie as “La Musique Creole.”

As the old Creole style was replaced by zydeco on the dance-hall circuit, Mr. Ardoin and Mr. Fontenot took their music to folk festivals and concerts worldwide. In the 1970s, Mr. Ardoin added his sons Morris, Lawrence and Gustave to his group, which became the Ardoin Family Orchestra.

He also recorded and performed with the Cajun fiddler Dewey Balfa and later with a younger generation of Creole traditionalists, notably Balfa Toujours, led by Dewey’s daughter Christine, with whom he made the 1998 album “Allons Danser.” And through the years, Mr. Ardoin’s songs made their way into the repertory of zydeco bands and traditionalist groups like Steve Riley and the Mamou Playboys.

He is survived by a brother, Delphin; his children, Morris, Florence, Mildred, Amelia, Dorothy, Juanita, Emily, Alberta, Matilda, Lawrence, Ronald and Russell; and “a whole bunch” of grandchildren, Morris Ardoin said. Three of those grandchildren — Dexter, Sean and Chris — lead their own bands, playing Creole music and zydeco.