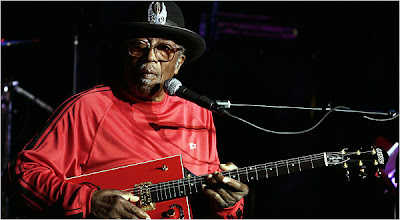 Bo Diddley, a singer and guitarist who invented his own name, his own guitars, his own beat and, with a handful of other musical pioneers, rock ’n’ roll itself, died Monday at his home in Archer, Fla. He was 79.

The cause was heart failure, a spokeswoman, Susan Clary, said. Mr. Diddley had a heart attack last August, only months after suffering a stroke while touring in Iowa.

In the 1950s, as a founder of rock ’n’ roll, Mr. Diddley — along with Chuck Berry, Little Richard, Jerry Lee Lewis and a few others — helped to reshape the sound of popular music worldwide, building on the templates of blues, Southern gospel, R&B and postwar black American vernacular culture.

It can be found in Buddy Holly’s “Not Fade Away,” Johnny Otis’s “Willie and the Hand Jive,” the Who’s “Magic Bus,” Bruce Springsteen’s “She’s the One” and U2’s “Desire,” among hundreds of other songs.

Yet the rhythm was only one element of his best records. In songs like “Bo Diddley,” “Who Do You Love,” “Mona,” “Crackin’ Up,” “Say, Man,” “Ride On Josephine” and “Road Runner,” his booming voice was loaded up with echo and his guitar work came with distortion and a novel bubbling tremolo. The songs were knowing, wisecracking and full of slang, mother wit and sexual cockiness. They were both playful and radical.

So were his live performances: trancelike ruckuses instigated by a large man with a strange-looking guitar. It was square and he designed it himself, long before custom guitar shapes became commonplace in rock.

Mr. Diddley was a wild performer: jumping, lurching, balancing on his toes and shaking his knees as he wrestled with his instrument, sometimes playing it above his head. Elvis Presley, it has long been supposed, borrowed from Mr. Diddley’s stage moves; Jimi Hendrix, too.

Still, for all his fame, Mr. Diddley felt that his standing as a father of rock ’n’ roll was never properly acknowledged. It frustrated him that he could never earn royalties from the songs of others who had borrowed his beat.

“I opened the door for a lot of people, and they just ran through and left me holding the knob,” he told The New York Times in 2003.
Read the rest of Ben Ratliff’s New YorkTimes obituary here. 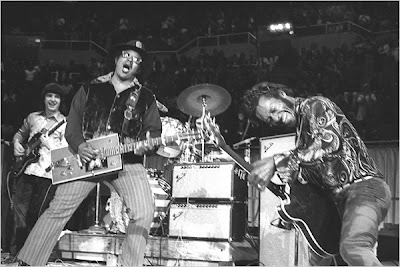 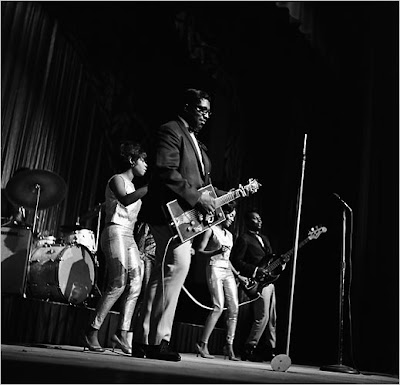 Mr. Diddley and his band performing in 1964 at the Apollo Theater in Harlem, New York. 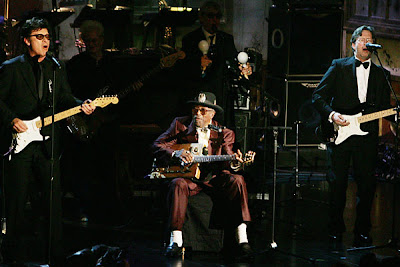 Mr. Diddley making a special performance with Robbie Robertson, left, and Eric Clapton, right, at the Rock and Roll Hall of Fame induction ceremony at the Waldorf Astoria Hotel in New York, March 14, 2005.