Big Sam’s Funky Nation Returns to The Green Parrot bar for two Funky Nights, with shows at 10 PM on Wednesday, February 23rd, and 5:30 and 10 PM on Thursday
Thurs, February 24th. 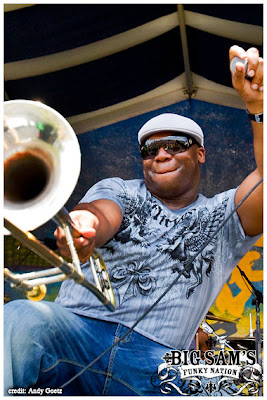 Big Sam’s Funky Nation is led by “Big Sam” Williams, formerly of the Dirty Dozen Brass band, who has been celebrated as “the top man on the slide trombone in the birthplace of jazz” by the San Francisco Chronicle. Big Sam IS the King of the Party, refusing to let the audience stand still with his signature dance moves and call & response MC style. The Funky Nation is a driving force of urban funk and their genre-bending music is best described as Noladelic Powerfunk.

For years Big Sam’s Funky Nation’s party has been captivating audiences worldwide, from France to Greece and Canada to Brazil. The Funky Nation is a favorite among national audiences and is currently on tour in the US. BSFN is a regular at major festivals (including Bonnaroo, South by Southwest, New Orleans Jazzfest, Voodoofest, Jam Cruise and many more). BSFN’s music has been featured in VH1’s Soul Cities, the Travel Channel, Regis & Kelly, and most recently HBO’s new hit series, Treme, on which “Big Sam” Williams has a recurring role.