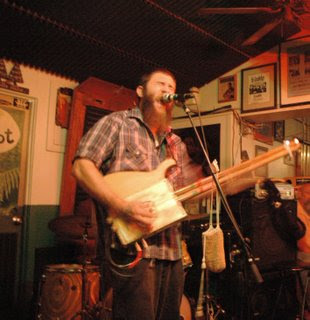 Hailed by some as “the future of Southern music”, Ben Prestage will
perform true American roots music and down-home Southern Country
Blues on slide guitar and diddley-bow
at The Green Parrot with shows Thursday, May 1st, beginning at 10 PM,
on Sunday, May 4th with a 5:30 to 8:30 “super soundcheck”, and
finishing the Parrot’s Annual “Cinco de Bayou” party on Monday, May
5th, beginning at 5:30 PM.
Hailing from the Dirty, Deep South, and born the grandson of a
Mississippi sharecropper, Prestage has
been soaked in blues tradition and Mississippi culture since birth.
Ben Prestage creates a fresh, new sound while resurrecting the
musical spirits of the past.
Prestage was voted one of the top 3 best performers at the
International Blues Competition in Memphis and he is the only two time
recipient of the prestigious “Lyons/Pitchford Award” for “best
diddley-bow player.” Ben now utilizes his mastery of the diddley-bow
to take this traditional, Southern, folk instrument to new dimensions.
FYI: from wikipedia: The diddley bow is an 1. American string
instrument of African origin. It is typically homemade, consisting
usually of a wooden board and a single wire string stretched between
two screws, and played by plucking while varying the pitch with a
metal or glass slide held in the other hand.
To the unique sound of Ben’s homemade diddley-bow (made by a friend,
John Lowe of Memphis, TN) he adds another homemade instrument, the
lap-steel-guitar (made by his father Kenneth Prestage.) The
combination of these two instruments creates a fresh, new sound that
is the perfect canvas for Prestage’s wordsmithing.
Growing up in the swamps of south-central Florida, Prestage began to
mix Mississippi country blues with his own brand of Florida swamp
blues.
Ben Prestage spent some time as a street performer on historic Beale
Street, while living in Memphis, TN. He used to share a spot in front
of the New Daisy Theatre with modern blues legends Robert Belfour (Fat
Possum Records) and Richard Johnston (2001 International Blues
Competition winner).
Being a street musician in the “Blues capital of the South” threw
Prestage’s music in a new direction. To his show, he added a cigarbox
guitar (made by Memphian an one-man-band John Lowe) which has stereo
guitar and bass strings that can be played independently, at the same
time. Then Ben added a series of four foot pedals that can be
manipulated by the heels and toes of both feet to play a drumkit.
The final result is Ben playing guitar, bass, and drums while singing
his own brand of Blues which leaves bottles empty and dance floors
full wherever his music takes him.
Playing in large festivals, every kind of bar, and sometimes on
downtown sidewalks, Ben’s muddy-water -meets-black-water stew has been
turning heads from California to the Carolinas to the Florida Keys.
Ben was voted “one of the three best unsigned performers in the world”
at the 2006 International Blues Challenge and is the only two-time
recipient of the prestigious “Lyons/Pitchford Award’ for “Best
Diddley-Bow Player”.
The Green Parrot is your Southernmost Center for Culture of
every kind, and is located at the corner of Whitehead and Southard
Streets. For additional information call The Green Parrot at
294-6133.