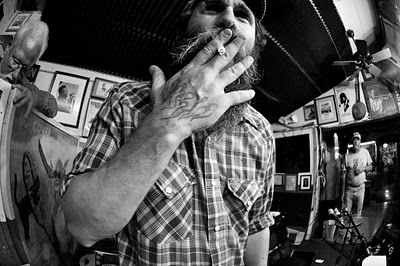 One-Man Band Ben Prestage Brings Delta Blues on Slide Guitar and Diddley-Bow to ParrotMaking his long awaited return to The Parrot stage, one-man band Ben Prestage will perform  American roots music and Southern Country Blues on slide guitar and diddley-bow Prestage was voted one of the top 3 best performers at the International Blues Competition in Memphis and he is the only two-time recipient of the prestigious “Lyons/Pitchford Award for best  diddley-bow player.Powerfully bottlenecking his homemade diddley-bow, cigar-box guitar or lap-steel guitar, and fiercely stomping on the stage,  Prestage is a one-man wrecking crew, creating a fresh, new sound that is the perfect canvas for his inspired, whisky-soaked word-smithing.  To this Prestage adds a series of  foot-pedals that can be manipulated by the heels and toes of both feet to play a drum kit. The final result is Ben playing guitar, bass, and drums while singing his own brand of blues which leaves bottles empty and dance floors full wherever his music takes him.Born the grandson of a Mississippi sharecropper, Prestage has been soaked in blues tradition and Mississippi  culture since birth.  Growing up in the swamps of south-central Florida, while also spending some time as a street performer on historic Beale Street in Memphis, TN. where he shared a spot in front of the New Daisy Theatre with modern blues legends Robert Belfour  and Richard Johnston, allowed Prestage to mix Mississippi country blues with his own brand of Florida swamp blues to create a fresh, new sound  while resurrecting the musical spirits of the past.