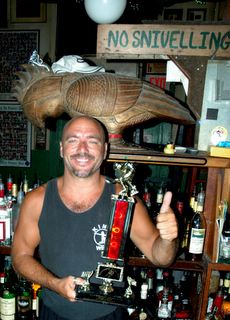 Steve Balmes displays the trophy representing First Place in the Eight and Under Division of The Southernmost Hockey League.
Beaver and co-coach Jay Gewin coached their Fraternal Order of Police team to the 2005 title, their playoff drive culminating with a victory over the stunned Police Benevolent Association team.
These two guys have been dedicated coaches for many years and we commend them for their contributions they make daily to the youth of our island.
We also salute the FOP players for the diligence they displayed in grinding out this long season, the endurance it took to stay alive to reach the playoffs, and finally the combination of skill, character and good coaching they showed by peaking just when the time was right and the stakes were high.