Harking back to the Glory Days of  Roddy, Frenchy,  Jimbo, Buco, Joe Dog, Fireball Frank and John,  the Parrot is again within striking distance of the championship cup. At High noon today, in what could be billed as a Subway Series,  The Green Parrot squares off against Cowboy Bill’s. Let’s Go Get ‘Em! 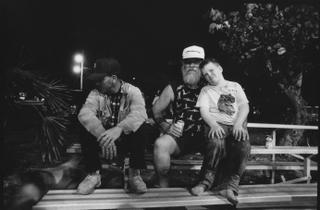 The First Grand Champions
of The Southermost Bocce League:
“They Can’t Take That Away From Us”
Seeing a recent post on the Solares Hil blog noting the Southernmost Bocce League’s role as the only true level playing field in town (no pun intended) brought back a host of memories from the early years on the league. Our old friend Brita Brooks took some great black and white photos back then.
This one was, we agreed, one of our favorites.
Pictured at the bocce courts are Fireball Frank, Jimbo the plumber, and Jimbo’s son Ian. 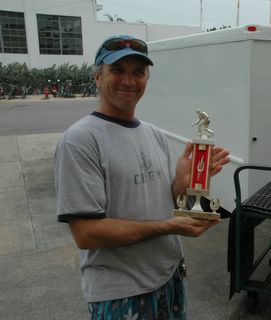 And here it is, Symbol of one of the great stories in Key West Sports History. The Championship trophy from the First Southernmost Bocce Season. I thought it was on the shelf at the bar all this time but Buco says hell no, he’s had it all along and has been taking the thing on tour for the last two decades like it was the Stanley Cup. 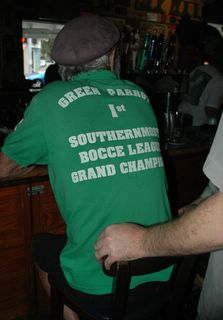 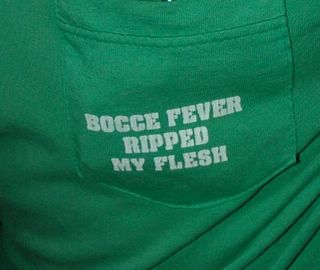 The inscription on the front Frenchie’s shirt… what can I say… we all voted on it…I guess. 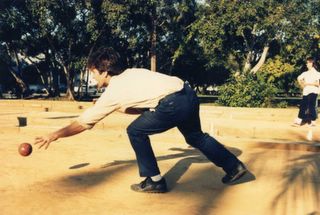 I managed to find a few old photos from that Championship Match between The Green Parrot and Big Ed’s Water Company, held on the old courts on Truman Avenue. That match now viewed by Key West Bocce Fans through the same gauzy lense as the Giants-Colts Yankee Stadium Matchup of yore..sporting a form right of a grecian urn, Buco lets one fly. 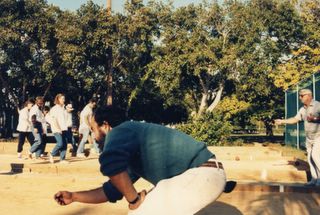 John rolls one. That’s Sal from the Sons of Italy on the right, a seminal figure in the Southermost Bocce League. It was Sal’s idea to hold a bocce tournament at the Sons of Italy Columbus Day Festa that was the inspiration and became the prototype for the S’most Bocce League. Sal commisioned us to build the court for that first tournament and having absolutly no idea how big a court was or what it was made of, and time being of the essence, we did what we always did in those days, all went back to the bar to discuss it at length, into the wee hours. We wound up making a late-night, long-distance call to the Overbrook Club, an Italian-American Social Club in West Philadephia where I remember watching much Bocce as a child. From this beer-soaked bar-to-bar conversation was gleaned enough information to begin construction of the Bayview Park court (yes, their was only one) the next morning. I’ll never forget that in closing our conversation with the guys from the Overbrook Club, one gentleman could not help but add, in the most formal of tones, “I would like to announce that the Overbrook Club defeated South Philadelphia for the City Championship this year”. As an aside to this story I’d like to add that we barely completed the court on time and not only did the Parrot team compete in that first tournament but our team was dispatched so quickly by the competition that day that we returned to the bar defeated (and this is what makes our run to the title that year such a stunning one) before the place was even open.
Sal was also the major player, along with Big Ed of course, in the inception of The Big Ed Rule. To my knowledge still the only rule of etiquette in the league. 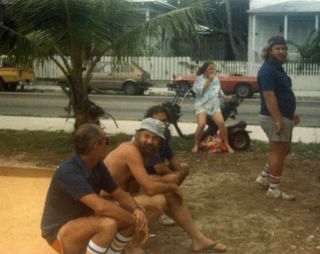 While The Parrot team and some fans ( left to right: Frenchy, Bob With The Eyes, Roddy, Valerie and Joe Dog) chart the next beer run. A Spartan scene for the finals in the playoffs…a far cry from the carnival-like atmosphere that pervades playoff games today. 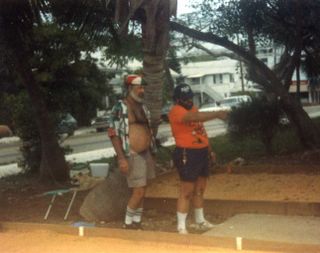 …Big Ed Orlando (of the Big Ed Rule fame) and Nilo Albury chart some strategy…with little sucess, I might add.