Neil Armstrong and Buzz Aldrin walked on the moon 42 years ago today. But what would have happened if tragedy had fallen on the Apollo 11 mission?

A piece in today’s L.A. Times noting the 42nd anniversary of the first lunar landing addresses that issue. The story quotes William Safire, Richard Nixon’s speechwriter, as he recalls Frank Borman, the White House liaison with the astronauts, suggesting that Safire should not just have a victory speech planned for Nixon, but something prepared if the mission didn’t succeed, Borman said, ” ”You want to be thinking of some alternative posture for the president in the event of mishaps.”

Safire recalls, “Suddenly we were faced with the dark side of the moon planning.
Death, if it came, would not come in a terrible blaze of glory; the greatest danger was that the two astronauts, once on the moon, would not be able to return to the command module.”
Frank Borman’s pragmatic suggestion and Williams Safire’s eloquence produced an document that mercifully never needed to be delivered but is remains both a homage to all explorers past and an inspiration for explorers yet to come. . 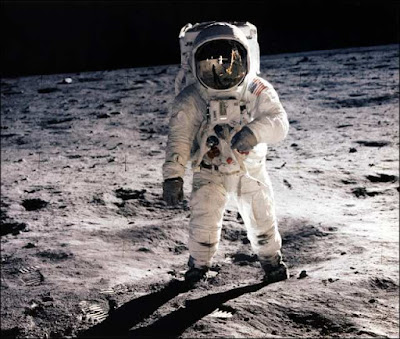 So Safire wrote this touching piece that thankfully Nixon never had to read:

Fate has ordained that the men who went to the moon to explore in peace will stay on the moon to rest in peace.

These two men are laying down their lives in mankind’s most noble goal: the search for truth and understanding.

In their exploration, they stirred the people of the world to feel as one; in their sacrifice, they bind more tightly the brotherhood of man.

In ancient days, men looked at stars and saw their heroes in the constellations. In modern times, we do much the same, but our heroes are epic men of flesh and blood.

Others will follow, and surely find their way home. Man’s search will not be denied. But these men were the first, and they will remain the foremost in our hearts.

For every human being who looks up at the moon in the nights to come will know that there is some corner of another world that is forever mankind.

Fortunately that speech was unnecessary, and has been stored in the National Archives.