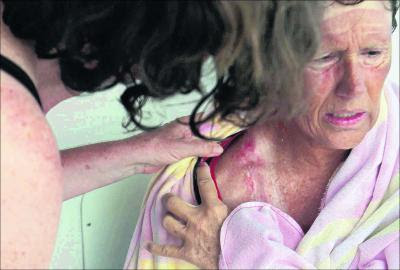 Alyce Torzsen, team nurse, takes a closer look at an area of chaffing on the shoulder of swimmer Diana Nyad after a nine-hour workout swim off the coast of Key West, Fla. The sea salt rubs skin raw and swells the tongue.

From The Halifax, Nova Scotia Chronicle-Herald:

She will swim about 60 hours in the churning sea, 166 kilometres across the Straits of Florida from Cuba to Key West. Every hour and a half, she will stop to tread water for a few minutes as she swallows a liquid mixture of predigested protein and eats an occasional bit of banana or dollop of peanut butter. She will most likely hallucinate and endure the stings of countless jellyfish. Along the way, sea salt will swell her tongue to cartoonish proportions and rub her skin raw.

“She is up against the most outlandish, outrageous, unbelievable physical endurance activity of, certainly, my lifetime,” said Steven Munatones, a champion open-water swimmer who runs the organization Open Water Source and will serve as an independent observer during Nyad’s swim. “I can’t imagine being in the ocean for 60 hours. I can’t imagine doing anything for 60 hours. It is inconceivable. It simply is.”