A couple of things prompted today’s post. The most recent thing was when Annie the bar manager asked me this morning as she was opening the bar, “Hey did you see that big statue down in front of the Customs House, they say it’s really something.” Well, I hadn’t, but my curiosity was piqued so I made it a point to get down there. The second thing was the impression Solares Hill’s smart, forceful headline concerning art in public place (pictured below) made on me, and Nancy Klingener’s incisive article (Nan’s headline too, I would guess) regarding the Key West City Commissioner’s decision to reject the free placement of seven of internationally-known American realist sculptor J. Seward Johnson‘s bronze figures at the Southernmost Point. “ 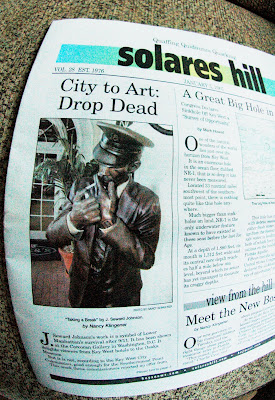 As it turns out, the statue Annie was referring to was in fact, one of Johnson’s.
Bunyonesque, it got my attention and I would say was worth the trip. 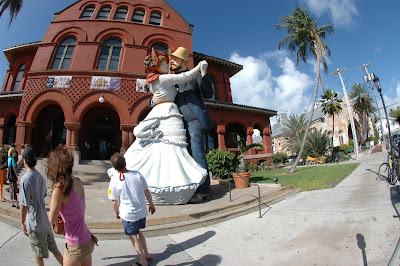 Even though it appears that either one of the dancers, could, like Godzilla, easily crush the egg car parked out front, the enamored couple seems, in spite of their mass, to be breezy, bouyant, and carefree, not to mention unwilling to tear themselves away from each other long enough to create any such mayhem., 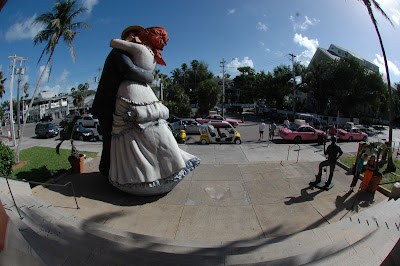 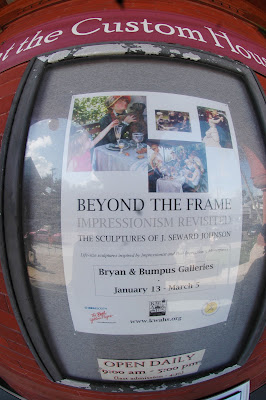 Seen on the front porch of the museum and part of the Customs House exhibit, a more typically-scaled Johnson Sculpture. 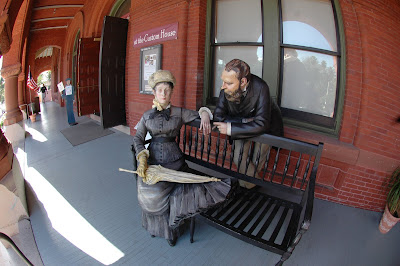 Local sculptor John Martini, an advocate of the Johnson figures at The Southernmost Point pointed out in Solares Hill that Johnson’s proposed sculptures at The Southernmost Point could become part of Key West’s ever-expanding cultural scene and a tourist attraction themselves. “Art and art-related businesses are a large part of what people are coming to Key West for. Cultural tourism is going to be very, very important in the future of Key West.”
This post was spontaneous but I may make a conscious effort to blog me some art next Sunday too.