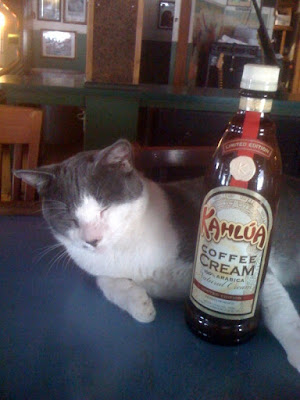 Frank the Cat, aka Frank Skids, has come out to mention his part in the Green Parrot’s freshly-minted mention by Tavern/Saloon maven and author Christine Sismondo, naming the Green Parrot as #3 on her Top Ten list of favorite bars. Christine says of The Parrot:
“Every time I’ve been to the Green Parrot in Key West, I’ve seen mind-blowingly good music. It’s also off the dreaded Duval strip, which means a greater likelihood of interaction with the locals, and at our last visit, home to a charming bar cat, Frank”
Frank was treated with such reverence by those around here who knew his backstory that you’d have thought it was the dali llama under the pool table.
Frank speaks out in a recent entry on his Facebook page to say , in that chesty, swell-headed way that is sooo Frank: “part of the great personality of the Green Parrot was obviously me”
Well Frank, how far did that personality get you?
And how much of it was personality and how much of it delusion brought on by the fistfuls of catnip delivered to you in that opium den of yours under the pool table by Buco, Dude, Chicken and the rest of you admirers(enablers).
So Frank, don’t get me wrong, I’m not trying to steal your thunder here. Were you part of the Parrot’s scene, it’s allure, it’s charm, it’s personality, as you put it? Well, yes, of course you were. No one can ever take that away from you, nor pretend to compete with you in the personality department, least of all me.
I’m just trying to put things in perspective here. Look at the sign,what does it say? It says “Since 1890”
Your popularity was meteoric, (even in cat years?) and by definition it was was a blazing arc that blasted you brightly across the heavens above Southard and Whitehead and just as swiftly delivered you cinder-like, to your new home in the Meadows with nothing but some memories and a scratching post.
So curl up with those memories, Frank, the catnip, the treats, the bowls of milk by the ice machine. And remember the tourists, Frank, the tourists, racing, pitched forward and as stiff-legged and hunched over as Grouch Marx, either to get a photo of you on their cell-phones or to pick you up and give you a hug, you a stand-in, a proxy for their kitty back in Columbus, Orlando or Eau Claire. It was exactly that kind of hug that ultimately led to your exile.
So Frank, don’t get me wrong, I liked you, more than you know. Towards the end it was me posing you on the bar for my own photos, with props even. That’s how far down the road I was led by your personality, and yes Frank, I fell for your charms. You’d think I was the one who’d been chewing the catnip. That made our divorce even harder, thank God Dude stepped into the breach to satisfy everyone fears(including mine): “But John, where will he go?”
So Frank, have a good life. It was great. It was a fling, a mere bagatelle and now it’s over. And I’m sorry to say that unless you waltz in the door as someone’s service animal we will be forever two ships just passing in the night.