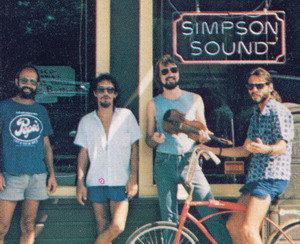 This Saturday shops across the country observed the eleventh annual nationwide celebration of in-person commerce known as National Record Store Day. Organized by coalitions of independent record stores, many record labels use the occasion to release collectible vinyl, limited-edition CDs and live material. 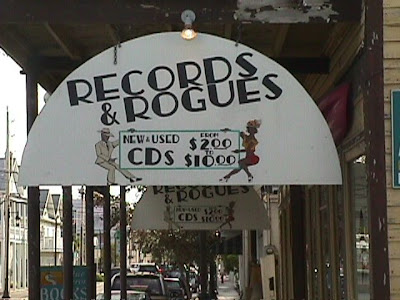 As a kind of footnote to that blurb:
Pictured above is Records and Rogues, late of Truman Avenue here in Key West, Marty and Dana’s Vinyl Emporium, Musicians Exchange, Band Clearing House and sometimes-Green Room for Danny Simpson and Melody Cooper’s Private Ear Studio, around back on Watson St. 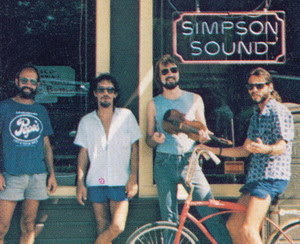 Pictured here in an archival photo from the early eighties in front of Records and Rogues is Proprietor of Simpson Sound, Danny Simpson *(with fiddle) flanked by Survivors Quint Lange and Woody Allen
In addition to the large selection of LP’s from popular genres, for those willing to mine the stacks there were dozens of hard-to-find collector’s items, many not even released in the U.S. In addition to a strong local following lured by the thrift aspect as well as the variety, I recall many visiting bands, Paul Cebar in particular, high-tailing it over there the first chance they got to see what may have come in since their last Key West gig, and shoot the shit with the boys. 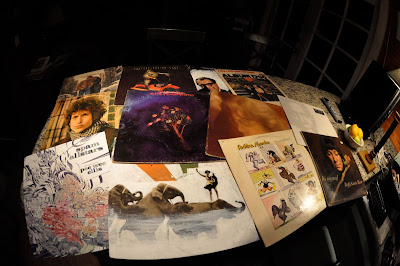 All this got me thinking about some of the vinyl I’ve been hoarding, so I pulled a dozen or so LP’s off the top of the pile I have stashed in the back bedroom and spread them out on the kitchen counter in no particular order, chronological or otherwise.
Top row, left to right, is The Freewheelin’ Bob Dylan, Amazing Rhytmn Aces To Stuffed to Jump, A Dave Brubeck Greatest Hits, Peter, Paul and Mary Album 1700.
Second Row, Blonde on Blonde and On The Threshold of a Dream, Neil Diamond (ouch) anda British Robert Johnson Collection.
Third Row: Spam Allstars(a new release), Fairport Convention’s Unhalfbricking, David Bromberg’s Reckless Abandon, and Buffy St. Marie
Pictured above is a photo DJ LeSpam’s turntable taken during one of his Spam Allstars gigs at The Parrot.
Pictured below is Andrew, DJ LeSpam, with his extensive vinyl collection behind him. 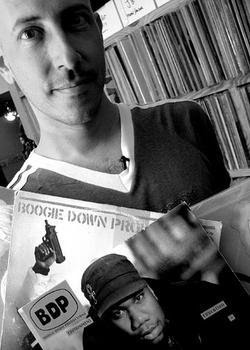 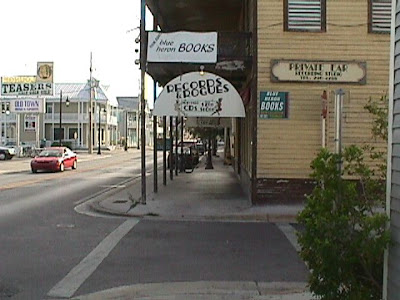 and here a link to National Record Store Day’s website

Record lovers and stores across South Florida are reveling on national Record Store Day, the day when record stores celebrate their existence and offer exclusive and special-edition vinyl albums for sale.
The original idea for Record Store Day was conceived by Chris Brown, and was founded in 2007 by Eric Levin, Michael Kurtz, Carrie Colliton, Amy Dorfman, Don Van Cleave and Brian Poehner as a celebration of the unique culture surrounding over 700 independently owned record stores in the USA, and hundreds of similar stores internationally.
Special vinyl and CD releases and various promotional products are made exclusively for the day and hundreds of artists in the United States and in various countries across the globe make special appearances and performances.
Festivities include performances, cook-outs, body painting, meet & greets with artists, parades, djs spinning records and on and on. Metallica officially kicked off Record Store Day at Rasputin Music in San Francisco on April 19, 2008 and Record Store Day is now celebrated the third Saturday every April.
Like book stores, record stores are suffering drops in sales as consumers move to new technologies. But new technology doesn’t always mean the best technology. An album on MP3 may not sound as good as one from a record, given that the record is in tip top condition.
But Florida music lovers rejoice, there are still a number of record stores out there. And some will be offering special album releases from the Flaming Lips, White Stripes, Nirvana, Big Star and Beastie Boys, according to USA Today. 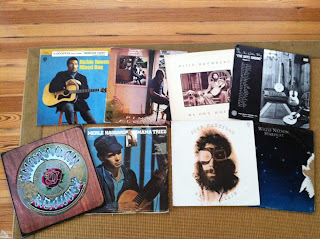 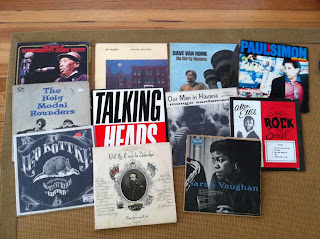 Some more of my vinyl.