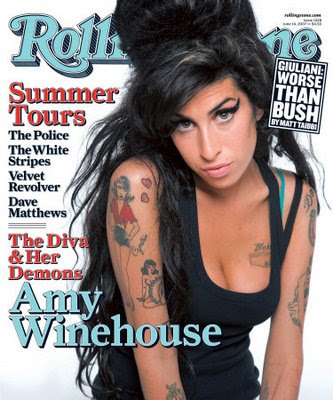 There has been much said about the tragic death of Amy Winehouse. Much was said with compassion, some not so much.

Ben Pareles informed but impassioned New York Times articles provides a fitting coda to her brief career.
He begins, “She was just getting started. Amy Winehouse, dead at 27, was only two albums into a career, and a life, that would be derailed by alcohol, drugs and bad choices.

Of her breakout album, Back to Black, Pareles says, “Its insolent, savvy but sadly prophetic single “Rehab” won Grammy Awards as Record of the Year and Song of the Year and the Ivor Novello Award in Britain, and it might not even be the album’s best song.

Under better circumstances, “Back to Black” would have been a foundation for a long and maturing catalog. Now, it remains as a warning that Ms. Winehouse could not bring herself to heed. “I tread a troubled track,” she sang in the album’s title song. “My odds are stacked.”

But her self-destruction was a deep loss to listeners. Ms. Winehouse was no manufactured pop commodity. She was a genuine musician: one of the very small handful of British singers whose version of American soul music had a gutsiness and flair far beyond what could be studied.

Ms. Winehouse’s 2003 debut album, “Frank,” made when she was still a teenager, introduced her as a tangy-voiced, scat-singing disciple of Erykah Badu, Esther Phillips, Dinah Washington and Sarah Vaughan. Like many pop newcomers, Ms. Winehouse showed off a little, swooping around melismatically when she didn’t have to. But she already had the slide and slur, the way of bending phrases down toward slight dissonance, that always made her sound so nonchalantly willful.

That friction between retro music and bluntly contemporary lyrics — to the point of raunch — was perfected on “Back to Black.” On that album, Ms. Winehouse worked with a disc jockey-turned producer, Mark Ronson, who could recreate the anatomy of vintage soul and R&B down to the studio room tone.

In songs she wrote largely on her own, Ms. Winehouse sang about her misery after a breakup, and about temptations she could not fight off: alcohol, drugs, sex and addict boyfriends. But with girl-group harmonies around her, and arrangements harking back to Motown, Stax and ska, she sounded shrewd and knowing, a woman who recognized all her own weaknesses and could see beyond them. Her beehive hairdos and out-to-there eyelashes only made her appear more amused, more in control, at least at the beginning.

In her music, Ms. Winehouse could sketch out her troubles and laugh them off, with a resilient beat and that insouciant flutter in her voice. Outside the recording studio, as a human being separate from her art, Ms. Winehouse couldn’t do that. Her songs, it turned out, would be wiser than she was.”
Read Ben Pareles entire New York Times article.