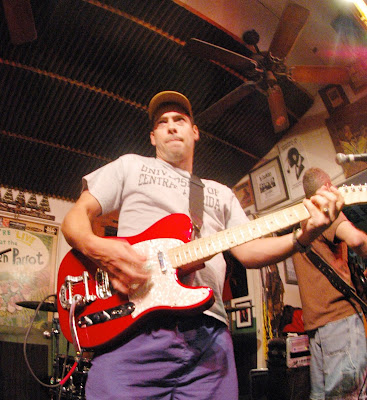 Albert Castiglia, One of Blues Revue’s “Ten To Watch” Future Bluesmen,
Returns to Green Parrot
Miami’s Albert Castiglia returns to The Green Parrot Bar on Friday and
Saturday, June 6th and 7th beginning at 10 o’clock with 5:30
P.M. “sound checks” on both Friday and Saturday and including a
special extended three-hour “Super Soundcheck” on Sunday, June 8th,
from 5:30 to 8:30 PM.
Hailed in the latest issue of Blues Revue magazine as one of “Ten
To Watch”, the editors of the prestigious blues publication thought
enough of Castiglia’s talents to include his name on a list of “…ten
artists who just might shape the way blues is heard (and seen) in the
future.”
Castiglia is a man not without an impressive resume. He was lead
guitarist and vocalist for the Miami Blues Authority for seven years,
named Miami’s best Blues guitarist by Miami New Times magazine, and
later became lead guitarist and vocalist for the legendary Junior
Wells. Since Wells’ death, Albert continued with Hoodoo Man’s Band,
and then toured with Sandra Hall.
Don’t miss this opportunity to catch one of South Florida’s most
dynamic and aspiring performers. Look for Albert to blow the roof off
the legendary watering hole when he explodes onto The Parrot’s stage
this weekend.
The Green Parrot Bar is your Southernmost Center for Culture at
the corner of Whitehead and Southard Streets. For additional
information call The Green Parrot at 294-6133.