Of course we all know that there’s a story behind every object that graces the walls of the Parrot but this is one of the better ones. 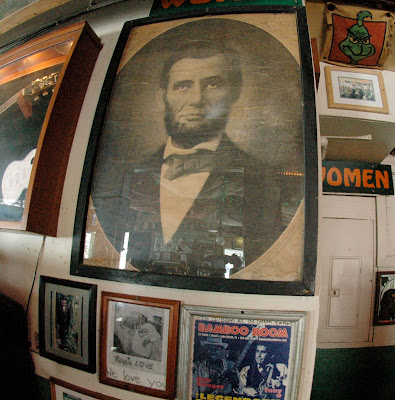 Seeing the story in today’s Key West Citizen about the family of Dr.Mudd visiting Key West this week prompts me to tell the story of the day we hung the Lincoln portrait it The Parrot. 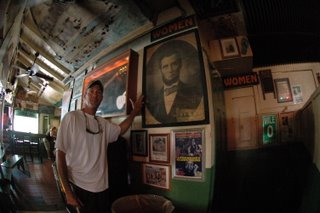 Pictured above is Ben who donated this spendid Lincoln portrait to us back in ’95.
The details surrounding the gifting of this picture bear repeating.

Ben, who lived just a few doors down from the Parrot on Whitehead Street was moving to Hawaii and felt that some of his carefully selected home decor would fit right in at the Parrot.
He repeatedly reminded me to stop by before he moved out and I repeatedly drove by his house in my van, sometimes several times a day, each time thinking to myself.” I gotta stop and see what he’s got in there”, but never stopping.
Weeks passed and finally one afternoon as I pass I see Ben stacking stuff up on his porch. He sees me and shouts “I’m outa here today!” And what catches my eye but this oversized portait of Honest Abe.  Seeing it I pull sharply to the curb across from his house, step across Whitehead and onto his porch to admire the framed portrait.
“What did I tell you?”, Ben says.
“Damn”, I says.
Following our brief exchange I rolled open the door of my VW Transporte and placed Abe in the back.
Here’s were the story gets interesting.
Sometimes things that get donated to the Parrot don’t always work their way into the Parrot decor right away. Not just sometimes, nearly always. It takes weeks, months or even years for donated objects to find their niche into the friendly confines. We don’t plan it that way. It’s just how it is.
But not this time.
Just a few weeks before, Good Time Charlie, our former house DJ had returned from a several-year stint in The Far East with The Ringling Brothers Circus. Before Charlie shoved off for China, he gave us, for safekeeping,  an autographed Michael Jordan Jersey which we proudly displayed, in it’s beautiful frame, above the juke box.
Well, now Charlie blew back  into town, staying barely long enough for  a beer, but long enough to reclaim his jersey  and leave a large unpainted rectangle where our centerpiece had been. I think we put a Gretsky jersey up in it’s place but I don’t think it lasted 48 hours before being mercifully replaced by the unpainted rectangle.
I mean really, Gretsky.
But now, “Surely Allah smiles on us today” I thought, pulling away from the curb in front of Ben’s house and picturing the nearly identically-sized Abe portrait as Michael’s heir apparant.
So two minutes and three left turns later I pulled up to the front of the bar and did something that a curator of the Green Parrot rarely, if ever, does, hangs something up right away.
If the story was interesting before, here’s where it got weird.
As I’m screwing Abe to the wall, and he looks great, by the way, one of two women sitting together at the bar gets up from her stool and asks me, “Are you putting that up because of what day today is?”
Puzzled, I asked her, “I don’t know. What day is today”.
“Today is the day Lincoln was shot”, she answered.
“Are you sure of that”, I asked.
If the story was weird then, now it got bizarre.
“I should be” she answered. “I’m the great-great grand niece of Dr. Mudd”, and pointing to the younger woman at the bar added she was taking her daughter to Fort Jefferson the next day to visit the cell were the doctor was imprisoned for setting the broken leg of John Wilkes Booth.
I’m not one given to conspiracy theories and the like, but what made Charlie come back after all those years, and made Ben flag me down on that day of all days, after all those weeks of me driving past, what drove me to put it up moments after I got it, in the presence of those two women, stopping briefly into a bar they had never set foot into before. 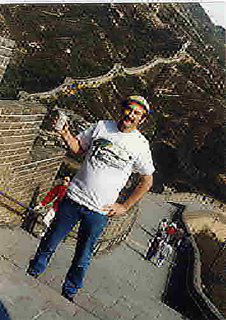 Here’s a picture of our former Disc Jockey, Charlie Flaherty. a.k.a Good Time Charlie at The Great Wall. He did what we all want to do in our heart of hearts and that is:He ran away and joined the circus; more specifically the Far Eastern Division of Ringling Bros-Barnum & Bailey.