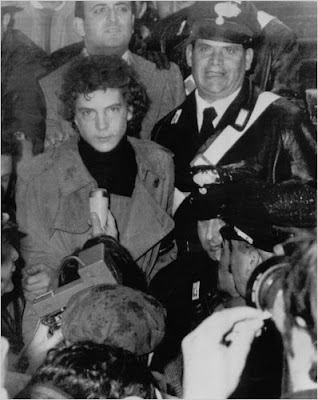 J. Paul Getty III, who was a grandson of the oil baron once believed to be the richest man in the world and who achieved tragic notoriety in 1973 when he was kidnapped by Italian gangsters, died Saturday at his home near London. He was 54.

J. Paul Getty III, missing his right ear, left the police station in Lagonegro, Italy, on Dec. 15, 1973, after kidnappers freed him.
His son, the actor Balthazar Getty, confirmed the death in a statement relayed in an e-mail from Laura Hozempa, one of his agents. Mr. Getty had been wheelchair-bound since 1981, when a drug overdose caused him to have a stroke that left him severely paralyzed, unable to speak and partly blind.

At the time of his abduction, Mr. Getty was just 16 and living on his own in Rome, where his father, J. Paul Getty II, had, for a time, helped oversee the family’s Italian business interests.

Expelled from a private school, the young Mr. Getty was living a bohemian life, frequenting nightclubs, taking part in left-wing demonstrations and reportedly earning a living making jewelry, selling paintings and acting as an extra in movies. He disappeared on July 10, 1973, and two days later his mother, Gail Harris, received a ransom request. No longer married, she said she had little money.

“Get it from London,” she was reportedly told over the phone, a reference either to her former father-in-law, J. Paul Getty, the billionaire founder of the Getty Oil Company, or her former husband, who lived in England.

The amount demanded was about $17 million, but the police were initially skeptical of the kidnapping claim, even after Ms. Harris received a plaintive letter from her son, and a phone call in which a man saying he was a kidnapper offered to send her a severed finger as proof he was still alive. Investigators suspected a possible hoax or an attempt by the young Mr. Getty to squeeze some money from his notoriously penurious relatives.

“Dear Mummy,” his note began, “Since Monday I have fallen into the hands of kidnappers. Don’t let me be killed.”

The eldest Mr. Getty refused to pay the kidnappers anything, declaring that he had 14 grandchildren and “If I pay one penny now, I’ll have 14 kidnapped grandchildren.” His son said he could not afford to pay.

Three months after the abduction, the kidnappers, who turned out to be Calabrian bandits with a possible connection to organized crime, cut off Mr. Getty’s ear and mailed it, along with a lock of his hair, to a Roman newspaper. Photographs of the maimed Mr. Getty, along with a letter in which he pleaded with his family to pay his captors, subsequently appeared in another newspaper. Eventually the kidnappers reduced their demands to around $3 million. According to the 1995 book “Painfully Rich: The Outrageous Fortune and Misfortunes of the Heirs of J. Paul Getty,” by John Pearson, the eldest Mr. Getty paid $2.2 million, the maximum that his accountants said would be tax-deductible. The boy’s father paid the rest, though he had borrow it from his father — at 4 percent interest.

The teenager, malnourished, bruised and missing an ear, was released on Dec. 15; he was found at an abandoned service station, shivering in a driving rainstorm. Nine men eventually were arrested. Two were convicted and sent to prison; the others, including the man prosecutors said was the head of the Calabrian Mafia and the mastermind behind the abduction, were acquitted for lack of evidence.

The aftermath of the ordeal left Mr. Getty as a reckless personality; the year after his release he married a German photographer whose name has been variously reported as Gisela Zacher and Martine Zacher. They lived for a time in New York, where they consorted with the art crowd of Andy Warhol. Mr. Getty became a drug user and a heavy drinker. His grandfather had died in 1976, and after his overdose, he sued his father for $28,000 a month to pay for his medical needs.

Mr. Getty’s marriage ended in divorce. Beside his son, survivors include his mother, who cared for him after his stroke; a brother, Mark; two sisters, Aileen and Ariadne; a stepdaughter, Anna Getty; and six grandchildren and stepgrandchildren.

Some time after Mr. Getty’s release, his mother suggested that he call his grandfather to thank him for paying the ransom, which he did. The eldest Mr. Getty declined to come to the phone.