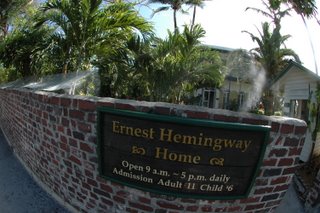 This is a developing story. Over the past few weeks it has been revealed- -both through on site inspections and an exclusive interview with a Hemingway House groundskeeper which was held in an undisclosed and top-secret location over several pints of Sierra Nevada Pale Ale while listening to a blues band-that the celebrated and much-photographed 5-toed Hemingway cats were having their movements severely restricted and being kept in near-lock-down conditions by the staff at that famous tourist attraction.
It seems that the cats were either: a. straying to far from home at night.
b. deciding they didn’t want to come home at all.
c. returning home at dawn but not before procreating with cats with a lesser toe count
and thus diluting the gene pool and producing cats that no one would want to pay
to see.
d. victims of ruthless poachers bent on kidnapping the famous felines and bringing
them back from their vacations as a kind of Hemingwayesque trophy. (note the irony
in that)
e. totally paranoid about any or all of the above.
As a result of these fears various sytems were installed in an effort to curtail their nocturnal movements. I could be wrong but I think I remember seeing some sort of plexiglass barrier being mounted atop the brick wall that surrounds the property and I seem to remember thinking “what the hell is that all about” or “damn that’s ugly”. At any rate that barrier failed, I guess the cats hopped over it. Next were the shock collars. It turned out the cats actually liked them and would pass through the beam several times before heading out for a night on the town. back to the drawing boards and out came the misters, those fine-spray jets that are placed around outdoor restaurants and the like to cool the air but the theory here is that cats would do anything to avoid getting wet and thus make the mist-barrier impenetrable. Well I guess that didn’t work either for now in addition to the misters, which can be seen as a fine spray to the right in the photograph, it seems they have installed some sort of mesh or wire that is visible on the left in the photo that now makes the once-handsome estate look like Omaha Beach. At any rate, as a kind of disclaimer, this is what we gathered so far from hearsay and we really can’t vouch for the veracity of any of it but we do know this: The Hemingway House is a great place and we recommend whole-heartedly it to anyone who asks us how much further it is (three blocks) and they sure are some handsome and distinctive cats they have there.