The other evening, while The Parrot was hosting their monthly meeting of The Green Parrot Ukulele Association, I noticed a few folks stroll by, stop, peer quizzically inside and remark, “Look at all those people with ukuleles. What are all those people doing in there?” 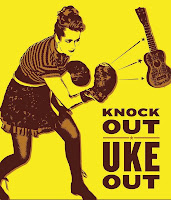 The whole thing started innocently enough the morning I found a small vinyl gig-bag holding an inexpensive ukulele leaning against the side of the Green Parrot building. I first  thought it was a mandolin, but when I unzipped the case there was the uke, complete with a tiny digital tuner clipped to the headstock. I knew a chord or two, and strumming it, I found it in perfect tune. I strummed happily all the way to the Green Parrot Lost and Found, where it sat, unclaimed for one week, then two.
In the meantime my oldest son, a uke aficionado himself, planned a visit to Key West from his home in Miami and, true to form, arrived uke in hand. Taking his cue and hoping for some sort of weekend jam session, I brought the unclaimed uke home from the Parrot Lost and Found box.After the briefest musical collaboration, my son said to me, “You have got to do this at the bar.”
As the wheels started to turn I thought of two things: number one was that the next week’s scheduled entertainment was Dash Rip Rock, the New Orleans-based country-punk band fronted by my friend Bill Davis. Number two was remembering a conversation I had with Bill last year. I asked him casually, “Bill, whatcha been up to?” “Teaching ukulele,” he said.

Bill was due to play the Parrot the following Friday so I called him right away and said, “Bill, if you could manage to get to Key West a day early would you be interested in fronting a Green Parrot Ukulele night?” Bill said, “Absolutely.” And in a minute we had sketched out the format for the show: Workshop for beginners, followed by featured-artist Bill, followed hopefully by open mic and, god-willing, an all-out, everybody-on-stage-strum-along.

The next piece of the puzzle came when I recalled a conversation I had had years before with Key West multi-instrumentalist Tim McAlpine where he mentioned  that one of his dreams was to have a Key West Ukulele orchestra. I called Tim next he assured me he was up for anything uke-like. So Tim would be the co-host with Bill Davis on that first Thursday night and would continue in that role monthly along with Jeff Clark,  a local triple-threat singer/songwriter musician whose ability to engage the audience as both entertainer and teacher became a key ingredient to the eventual success of the Association.
The first-ever meeting of The Green Parrot Ukulele Association (GPUA) was held Thursday night, June 2nd.
Avid ukulele enthusiast and teacher Bill Davis of Dash Rip Rock hosted this first-ever Green Parrot Uke Out. Things kicked off as planned with a ukulele workshop for beginners, followed by featured artists Bill Davis and Tim McAlpine strumming some tunes of their own, then an open mic sign-up, and finally an all-out strum-along with at least 20 uke-toting participants.
It seemed that night that we uncovered a Key West ukulele scene simmering just below the surface. And The Green Parrot was the perfect vessel for this unique way for Key Westers to meet people and make music at the same time.
For folks seeking a little pick-me-up in these bleak times, ukulele night with The Green Parrot Ukulele Association seemed just the ticket. As singer-songwriter Louden Wainright III once said, “In terms of Improving one’s mood and general outlook I consider the ukulele to be the big gun.”
Now we encourage everyone to dig out that old ukulele from your attic or closet and strum your way into a four-string stupor at Green Parrot Ukulele Night, Key West’s only ukulele-powered jam session. Come to just listen, or join in. All levels are welcome and spare ukes and instruction are available for those who want to try them out.
Noting the happy-making effect of the instrument, Manager John Vagnoni says in third person for this blog post: “I think we may be completely shocked to find there is a whole community of ukulele-ists out there. There’s very little music by the ukulele that isn’t joyful and playful, and that is part of the attraction,” says Vagnoni, dismissing that awkward feeling of composing a blog post and quoting himself in said same post. “With just four strings, two octaves, a low price-point and diminutive size, the ukulele appeals to both amateurs and professional musicians alike.”
Like so many of the good things that happen at The Parrot, the success of Ukulele Night is not the result of one person’s talent or passion, but rather the result of a group of people taking a seed, planting it and nurturing it to fruition all with the same goal, just to have some fun. Charter members who were the hand-maidens of this included Ron and Charlie Bell, Will Thompson, Jay Gewin, Ashley Kamen and Gretchen Mills, Allison Withers Johnson, and Gary Zimmerman.
We are also proud to announce that for the first time, The Green Parrot Ukulele Association hosted a meeting outside the friendly confines of the bar when Sweat Records, the popular Miami indie music store, event space, and coffee house played host to The Green Parrot Ukulele Association, Miami Chapter.
It is also worth noting that John Lennon’s first instrument was the ukulele, and by the end of George Harrison’s life, he was carrying two ukuleles as his carry-on baggage. He was the most spiritual of musicians, and where did he end up in terms of enlightenment? Ukulele!
Meet some of the folks at GPUA, or better yet, join us!