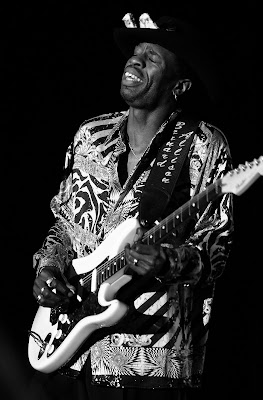 Bernard Allison, the guitar-playing, singing and songwriting son of the late, legendary blues guitarist Luther Allison will appear at The Green Parrot with shows at 10 P.M. at 5:30 and 10 P.M on Thursday, November 12th.
Bernard Allison totes the same smokin’ six string shooter that his late father Luther Allison assaulted the blues with. And he is blessed with his father’s soulful voice, spiritual devotion, and a musical freedom which experiments with the blues.
Bernard made his first appearance on record at age 13, when he played on a live LP his father recorded in Peoria, IL., playing “You Don’t Love Me Know More” and “Sweet Home Chicago.”
At 18, Bernard joined his father on-stage at the 1983 Chicago Blues Festival. Then, one week after he graduated from high school, Bernard got a call from Koko Taylor asking to be her lead guitar player.
He joined Koko Taylor’s Blues Machine for three years.
The 1980’s became Bernard’s classroom as both learner and teacher. Relationships in the 80’s with Johnny Winter and Stevie Ray Vaughan expanded Bernard’s guitar foundation. Then, in 1989, Bernard flew to Europe to record with his father, was asked to lead the band, and, like his father, adopted permanent residence in Europe. A recording of the furious collaboration between Luther and Bernard at the 1989 Chicago Blues Festival can be heard on the Luther Allison album Let’s Try It Again, on RUF Records.
It’s obvious that Bernard has inherited Luther’s knack for igniting audiences; but he’s no clone of his famous father. He is definitely blazing his own path with a style that reflects a unique mix of traditional and modern influences. The Allison torch has been passed, and it’s clear that Bernard takes his role as its bearer very seriously. He’s assumed the challenge of keeping the blues alive and growing – a commitment he renews every time he takes the stage.
The Green Parrot Bar is your Southernmost Center for Culture of All Kinds at
the corner of Whitehead and Southard Streets. For additional
information call The Green Parrot at 294-6133

International Blues Challenge First Place winners J.P. Soars and The Red Hots will appear at The Green Parrot Friday, November 13th with shows at 5:30 and 10 P.M.
J.P. SOARS & THE RED HOTS took the Blues world by storm by winning the most coveted 2009 International Blues Challenge (IBC).
With the mission to find the best-unsigned blues band, this annual competition is held worldwide on a regional level by The Blues Foundation’s 150 Affiliated Organizations around the world. A record number of 164 bands and solo/duo acts from Blues societies around the world took the stages of Memphis’ legendary Beale Street on Thursday and Friday to compete for over $20,000 in cash and prizes, before notable Blues industry judges in hopes of making the finals on Saturday, drawing an audience of many thousands to Beale Street in downtown Memphis.
When the dust cleared J.P. Soars & the Red Hots (CHRIS PEET on drums and GARY RIMMINGTON on bass) sponsored by and representing the South Florida Blues Society took first place and the title BEST UNSIGNED BLUES ACT IN THE WORLD!
J.P. Soars also individually won the Albert King Award, which establishes him as the best guitar player in the competition this year.
Catch this ultra-dynamic group this weekend at The Green Parrot Bar, your Southernmost Center for Culture, at the corner of Whitehead and Southard Streets.

Brooklyn-based multi-ethnic funk and soul afro-beat-latin whatever mash-up band, the The Pimps of Joytime will
will make their Green Parrot debut with shows at 10 P.M. on Saturday and Sunday November 14th and 15th.
The Pimps of Joytime is a multi-ethnic group that hits all the marks and crosses all the barriers, bridging the gap between underground funk, soul, pop, dance, afrobeat and latin, filling every song with soulful harmonies and great vibes.The Pimps of Joytime’s members come from New Orleans and Brooklyn. That explains a lot: Big Easy “Second Line” meets the streets of New York City.
Brian J is the band’s ringmaster. He started PJT’s in Brooklyn back in 2005, where they cut their teeth while playing clubs in Williamsburg and the East Village. On stage, he’s the lead singer and guitarist, and in the studio, he’s the funkiest one-man-band this side of Minneapolis.
Mixing samples and dance beats with tasty live musicianship and sweet vocal harmonies, The Pimps of Joytime have evolved into the current five-piece that gets crowds on their feet from London to New York to San Francisco. Somehow, PJT’s found a way to put a modern twist on a retro sound, creating dirty, ass-shakin’ grooves like no one else out there.
2008 was a great year for The Pimps of Joytime—they put out two albums on DJ Nickodemus’ Wonderwheel Recordings, “High Steppin” and “Funk Fixes and Remixes”. 2009 is gonna be even better—with a new record on the way and a team in place to bring this band to the masses across the USA and beyond.
The Green Parrot Bar is your Southernmost Center fo Culture of all kinds at
the corner of Whitehead and Southard Streets. For additional
information call The Green Parrot at 294-6133. 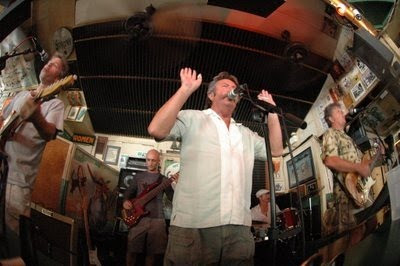 The Old Man of Blues, our own Bill Blue, will return to the Parrot stage Sunday, Novemberr 15th, beginning at 5:30 pm.
When Bill Blue came to Key West in 1983 with a pretty girl, a Cadillac
and very little money he was coming off 18 years of road dog touring
and recording. In the twenty years he made this island his home he
opened a music store and a recording studio, but most of all he left
his mark as a performer.
And now, at a Sunday afternoon “soundcheck”, Bill Blue will be celebrating His thirty-plus years
of writing, recording and performing music and The Green Parrot Sunday “soundcheck”
seems the fitting place.
See what all the excitement’s about Sunday afternoon at The Green Parrot
Bar, your Southernmost Center for Culture, is at the corner of
Whitehead and Southard Streets.
For additional information call The Green Parrot at 294-6133. 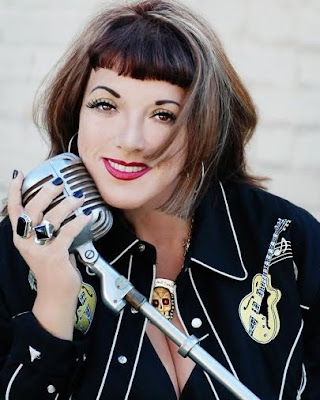 The island is buzzing with the news of Candye Kane’s return to The
Green Parrot for two wild nights, Tuesday and Wednesday, Novemberr 17th and
18th, beginning at 10pm and including a 5:30 PM “soundcheck” on Wednesday.
Continuing nearly two decades of relentless
touring, the seven-time San Diego Best Blues Award winner is on a 26
city tour in support of her tenth CD, “Superhero”.

And what a swingin’ CD it is. But Candye is at her very best live and
in all her glory. Candye has made her mark here over the years, and
nobody’s forgotten. Kanes’ live shows are the stuff of legend. She honors the bold blues women of the past with both feet firmly planted in the present. Nominated for a 2008 National Blues Foundation Award for Best Blues Contemporary Female (the highest honor for blues artists) and beating down pancreatic cancer the same year, Kane is one tough cookie.
She belts – growls – shouts – croons and moans from a lifetime of suffering and overcoming obstacles. She uses music as therapy and often writes and chooses material with positive affirmations that leave the audience feeling healed and exhilarated. Candye’s shows at the Parrot willbe a NON-SMOKING events due to her recent battle with cancer.
A show that is part humor, revival meeting and sexuality celebration, she’ll deliver a barrelhouse-tongue-in-cheek blues tune or a gospel ballad like Jesus and Mohammed, encouraging audiences to leave behind religious intolerance. She’ll slay the crowd with her balls out rendition of Whole Lotta Love or glorify the virtues of zaftig women with 200 pounds of fun. She often says she is a “fat black drag queen trapped in a white woman’s body” and she dresses the part. Bedecked in bright colored feathers, sequins and rhinestones, Kane’s performance is Mississippi by way of Las Vegas with a quick stopover in San Francisco.

Her credits include TV appearances on Roseanne, Penn & Teller’s Sin
City, and on HBO, and is featured on the House Of Blues label release,
“30 Essential Women Of The Blues,” alongside such luminaries as Bessie
Smith, Alberta Hunter and Etta James.
Candye Kane is a multi-talented singer, songwriter, and musician, but
her many facets don’t end there; she is a devoted mother, a political
activist, a sexual libertine, student, actress, lecturer….the list
goes on. A true Renaissance woman and a plus-size voluptuary, her
eclectic career has spanned more than a decade, and she has made her
mark in quite a few areas. But her true talent, her undeniable gift,
is her voice.
Candye’s voice is awesome; or rather awe-inspiring. Like an amazing
sunset, or a volcanic eruption, The Grand Canyon or the huge primeval
Redwood forests, her voice is a natural wonder, something that cannot
be learned or faked. There are hints of Etta James, Big Mama
Thornton, Wanda Jackson and Patsy Cline, to be sure, both the sheer
power and volume are Candye’s alone, and her innate sense of phrasing
and intonation make her voice unique. From raunchy blues to
wrist-slashing country ballads, from slinky be-bop influenced numbers
to western swing, she has a natural command that can transcend any
style.
The Green Parrot is thrilled to welcome Candye back. It’s an event
worth planning your week around. For additional information call The
Green Parrot at 294-6133.