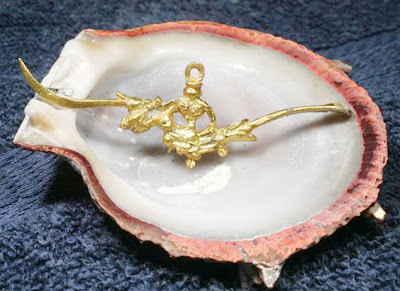 This post is perhaps only peripherally related to the Parrot but does qualify as as one of the more interesting items to be found scanning the local papers this morning.
The item descibes the latest and one of the more curious artifacts to percolate up from Mel Fishers’ Santa Margarita mother-lode of treasure near the Marquesas..

The item in the Keynoter states:”A tiny gold combined toothpick and earwax spoon, believed to be more than 385 years old, was examined by experts Monday after being recovered from Key West waters during the search for a shipwrecked Spanish galleon. The minuscule grooming tool measures approximately 3 inches by 1.25 inches and weighs about an ounce. It was located Sunday by Blue Water Ventures diver Chris Rackley, who was making a detailed visual examination of the sea bottom about 22 feet below the surface 40 miles west of Key West.”

According to Mathewson, the grooming tool dates from the late 16th Century or early 17th Century and was probably worn on a gold chain. He estimated that its value could exceed $100,000. 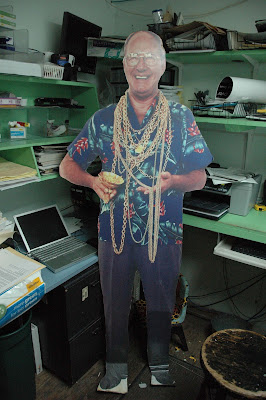 Knowing Mel, and with all due respect, having seen him walk nonchalantly into the Parrot with real gold bars sticking out of his pockets, I know what he would have said as he casually tossed this remnant of conquistador culture on the bar: “stick it in your ear”.